Some of us at the Worcestershire Home Brew Club have decided to take a stab at becoming beer judges, in the hope that we can organise some sanctioned competitions in 2020 in the Midlands area. If nothing else, we should at least become better brewers by judging our own and each others beers for some constructive feedback. As we’re in a co-dependant situation – we have no judge to learn from – we’re taking things slowly over a few months, getting together once a month to do some blind taste testing, scoring and general chat over what we can (or can’t) smell, taste and feel in our beers. We’re following the plan from the official 2015 study guide, and January was class number 3.

The format we’re following is an initial discussion the technical side of brewing, followed by five commercial beers in a blind test, which we then have to figure out which was which style, finishing with a full scoresheet of a commercial beer. This month, we had:

Malty aroma with some fruity notes. Light caramel sweetness and some yeast flavours. Subtle strawberry fruitiness. Bitter finish builds up after a while but is moderately low. 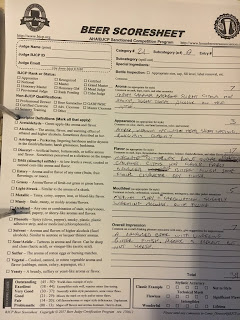 As a group we arrived at a very similar score for the Founders IPA, 39-42 points between 6 people. This was all done individually, and only discussed once all scores had been given. Pretty impressive that we were all within 3 points of each other!

Next month is off-flavour tasting, so plenty of Bud Light will be on the table. As long as people around us don’t think we’re in some kind of bad beer club, we should be alright.